There have been some questions about the title of this trip. Here's my version of the story (Carl, send any corrections you see fit!):

Back in (I think) the late 70's, Carl suggested a motorcycle trip to Alaska. The basic plan was for us to buy new motorcycles, ride together across Canada on the Trans-Canada highway, then up to Alaska on the Alaskan Highway. We were looking at new BMW RTs. Somehow, we didn't do it.

In the mid 80s we talked about it again. This time we would buy new Kawasaki 750 4-stroke twins from Al Arbor, trailer them to Phoenix where Dick would join us, and the three of us ride up the Alaskan highway. We didn't do it.

The trip was mentioned in passing over the next 20 years, but it wasn't seriously contemplated.

During Winter Vacation in Phoenix this year, Carl said that it was time! If we didn't do it now, we never would (I'm 64). He suggested chopping the itinerary to Northern Arizona, a couple of hundred miles a day, for a week or so. Dick was intrigued!

About 17 years ago, Dick brought his 1969 BMW R60 in for its annual emissions test, and it failed. This was normal, and there was a procedure he had to go through to get it to pass for the year. This time, however, his company offered him an early retirement package, which consumed all his time for the next several months as he and Shirley studied their finances to decide whether or not they should take it. There were also other family commitments that kept him away from getting the motorcycle inspected. Then Shirley had her stroke, and he was fully committed to her care. So the BMW just sat idle for about 13 years.

Four years ago, during Winter Vacation, Bob, Rick and I pressured Dick into getting the BMW back on the road so that we could ride it. He did, and it worked remarkably well considering it's long layoff. So for the next three years Dick would always have the BMW ready to go for winter vacation. He also rode it some during the year, but mostly out to the cemetery from time to time to visit Shirley, a trip of some 5 miles each way on 40MPH roads. So when Carl suggested the trip this fall, Dick and the BMW had both been in graceful motorcycle retirement for 21 years.

Dick immediately determined to go into training, with the bike, to see if either would be up to it. And he tentatively agreed to the trip in the fall, should his testing and training go well.

Well, it did, and the Great Alaska Motorcycle Trip is now history. We went for 7 days, about 1500 miles. We had a blast!

Here is what happened!

The adventure has begun!

Click on any pictures to enlarge them to full size. 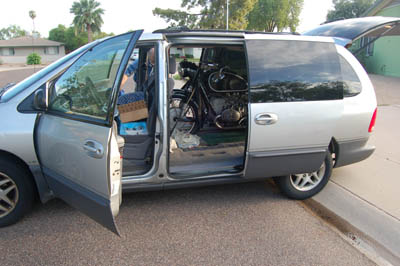 My first problem was a motorcycle. I still have the 1966 BMW that I rode to Phoenix with Dick in 1967, and I really wanted to use it. But I couldn't really imagine riding it to Phoenix again. I looked at shipping it out there, and also at renting a bike in Phoenix, but finally decided to put it in the back of the Dodge Grand Caravan and drive to Phoenix with it. Carl decided I couldn't be trusted driving out to Phoenix alone, so he decided to fly to Massachusetts and drive out with me. Consequently, Carl drove his Harley from LA to Phoenix on Saturday, 9/2. He left it in Dick's garage and flew to New Hampshire the next day, where Ruthie, Marilyn and I picked him up. We then met with Kirsten and Anker at our favorite Chinese Restaurant for a celebratory dinner. I still had some preparation to do on the BMW and Dodge on Monday, and Tuesday morning we were ready to go. We left (after Ruthie fed us a big breakfast) about 9AM Tuesday morning, and arrived at Dick's house Thursday evening at 7:13PM. With two drivers it wasn't a problem, we spent two nights in motels. It was a great trip, and we had a good time together.

Friday morning, Carl took our first pictures as I unloaded the BMW from the van. 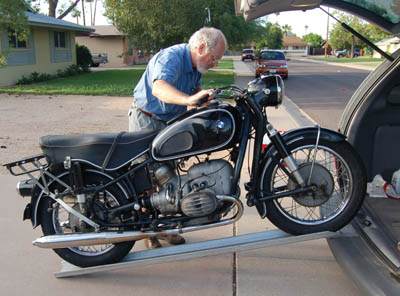 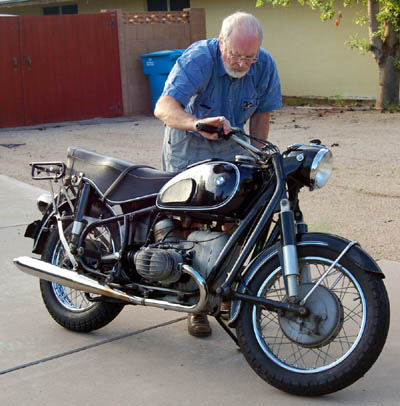 The mighty BMW in Dick's driveway for the first time in 39 years! 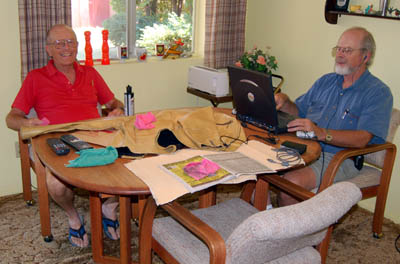 Friday was a planned day off for resting up, and final preparations. Here I am slaving away on the computer finishing the route, while Dick relaxes cleaning his jacket.

We had originally planned to start the trip today, but because of predicted thunderstorms up north we decided to leave tomorrow. So today we will take a shakedown cruise out to South Mountain Park, about an 86 miles round trip. 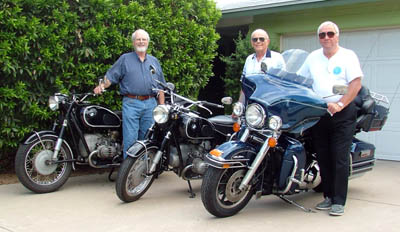 Well, we made it! We started little late because of threatening weather, but it started to clear about 11:00 Am so we headed out. We took the long route to South Mountain Park, stopping at lunch at Taco Bell on the way. Here we are, ready to leave in the morning. 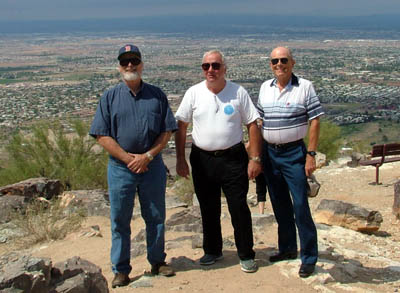 Here we are at South Mountain Park. We met a couple of nice ladies from Cincinnati, who took this picture for us. It was a real nice ride up the mountain, and a beautiful place to hang out! After admiring the view for 30 minutes or so, we rode back home.

We found a couple of minor problems with Dick and my bikes, but were able to fix them during the afternoon. Mine was an electrical problem, turned out to be a loose wire.

I didn't bring the PC on the trip, so the following pages were all written after we got back.

Click here to see our Itinerary, and some Maps of the trip.